The Turning Season, My Turning Wheel 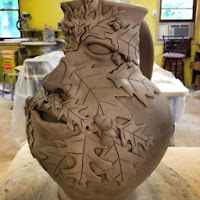 The wheel turns. I saw yellow leaves today..in fact all week we've been spotting them and Rowan and I look at each other and silently make a pact not to recognize them just yet.

Facts are facts. It's past Labor Day in NW PA and Autumn is here.

It's nearing the end of our first selling season at The Market Village here in Tionesta PA. I hardly remember a thing. It has been a blur, We moved out of our old place in stages, started bringing stuff into our new place in stages, and kept the studio running nearly nonstop while we moved, did repairs on our old house and our new house and got the old one on the market, while we also opened a new store, did summer events, filled massive wholesale orders and entirely missed the joys of living in a beautiful wild forested area beside 2 major bodies of water. We'll try again next year for that..I need some Kayak or Canoe time.

The point is, there has been way too much going on and right now, I may or may not be going through post-season decompression, followed by depression and perhaps a mid-career crisis.

Lately I have been listening to a podcast by Ben Carter while I work call Tales of a Red Clay Rambler. It's been great, but also depressing because whenever you hear other peoples stories in clay and creativity you also inevitably compare your life to theirs, Most of what I have heard so far has been interviews with young people who have gone to undergrad, then graduate school and then done residencies and somewhere in their early 30's are starting to try to figure out how to make their art, do their work and make a living. Some are doing it, some need other jobs I was also a little surprised to hear the rough stories of some of my clay heroes. People I assume are making that living and are stable and deep in clay success bliss..but it isn't so. They make awesome work, but their venues have failed, they've had to not work for months, or years, or have even been forced into semi-retirement by illness. It was a wake up call that your actual success isn't measured by how many shows you have been in, how many of your pieces are on show posters handed out at NCECA, or how many potters know your name. It's more a combination of quality work and a satisfactory living, not much of which comes from other potters knowing your name. It comes from your market, whether you are selling at a farmers market, a storefront, a gift shop or a gallery of some sort.

I'm very proud to say that since 1994, I've made my whole income from selling my work. Sometimes it hasn't been much of one, but it has become increasingly more stable over the years. That's what I have been doing for the last 20 years. Instead of taking academic development time, I've been throwing work that is 1/2 step above production work and 1/2 step below being an exclusive studio potter with new bodies of work coming out every couple years and  having shows of my latest ideas in clay. I haven't done craft fairs, I've sold in strange niche markets that most people never even think of. Lots of the folks I went to school with at PSU took the standard path, they are professors or otherwise involved with academia while I have been in the trenches, trying to hold on to some deeply instilled lofty ideals, while also trying to get my work into the hands of every person I can. It takes a lot of mugs to make a living.

How many mugs does it take to make a living? Good question, when I feel like I am truly and consistently making a living, I'll let you know.

So you remember those beginning days at the community center or undergraduate school where you felt accomplished making 100 pieces in a semester?

I just got another order for 100 mugs for next month...now I love my mugs, they're big, 16oz, round, comfortable to hold in a bunch of ways, and people like to cuddle with them. Round happy mugs, just like the round happy potter who makes them. They're beautiful and functional,  now for businesses we can add branded medallions. I also have 100 mugs for another order,,and I need 100 mugs for our  own shop. Now I have 300 mugs to make and that's just mugs! Damn does it take a lot of mugs to make a living. Now we don't live by mugs alone, so I have to consider the 200 plates on the list too and that's when I start to get sad, because all of this has to happen so fast I don't know if I can do it all without cracking up because we..I've been saying I a lot...but I mean we, because my wife Rowan works side by side with me in the trenches need a week off, but because we don't know how many mugs it takes to make a living, we haven't yet made a living which means we can't taken a week off yet. Got that?

So what's the cure?

We're adding some more stuff to the list! We're working outside the catalog a little bit..for fun and hopefully also a living. We're doing a special online only sales even on 11/15/2014. The details are here on Facebook

Is this the cure?


No. So far its been fun, a pleasant change of pace to work out Some seriously fine work there, also some not so serious. Some of it is whimsical and fun, some of it more archetypal. Most of it I like a lot and wouldn't mind too much if it hung around for a while.

Also, I've nearly run out of clay..which has slowed me down and I'm working through some reclaim making odds and one of a kind playful work while I wait for the next ton. Then its back to business.

But we're still burned out.

So what is the cure?

I bought some beer. No that's not the cure..but a bottle or two of beer is really nice, and it does take the edge off a rough day.

So what is the cure.
The cure is overcoming our work ethic and realizing that our fear of poverty isn't getting any better because we push out work at midnight because 12 hours ahead isn' t really going to make or break us.

It's going to have to be less self-control, less dedication, less willingness to work late hours.

I think that if we call it a night earlier..if we take the day off for something fun, that the rest of the time will be more focused and more productive. I think it's time to rededicate ourselves to the ideal of

Maybe even two days off.

But it's so hard...I mean the answer is always work harder Work Faster! Do more!