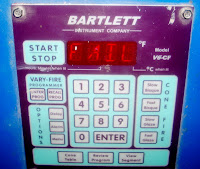 I haven't felt very focused the last couple days in the studio. There is a lot going on and I am not sure where to put my attention, so sometimes I put it on snoozing on the couch when I should be working :) That said.

I had a Thermocouple burn out in one of the kilns about a week ago, luckily I had ordered one in advance and was expecting it soon. I then went and ordered another one and complained to the seller that the first one hadn't arrived yet. She agreed to send it priority mail at no extra charge, which was mighty fine of her since she was already charging men more than priority mail would have cost. $8 for shipping! (total of $16 for both of them even though the actual postage on both totaled barely $8) Well the priority one arrived in 3 days and the one she had sent by first class still had not. It arrived today. Then I discovered I had ordered the wrong one. Yep..all that waiting and I got one that was too short.  Ro and I looked at it and decided that although it was not going to stick as far into the kiln as it should it would probably do for a bisc.. We ordered some more through Bailey and she installed the short one for now.  Speaking of overcharging..to get Bailey to ship in less than 3 days you have to pay them a RUSH fee of $5, then if you want it shipped fedex or via express mail they overcharge a lot. As someone who does a lot of shipping I know that a couple thermocouples shipped overnight shouldn't be more than $25 from NY to PA, probably $20 by Express Mail.. But they wanted $45! I don't mind an extra buck or 2 for packaging etc..but that was just greed.

Back to the positive

Ro is such a blessing to me. I have very little fine sensitivity left in my fingers and she has learned how to do many of the repairs I find it difficult to do without much sensation in my fingers..like messing with wee little screws and wires.

I have no idea if having it barely poking into the chamber will affect the way the thing reads or not, but we're going to give it a try tomorrow.

I spent a lot of time yesterday pulling handles, then throwing some assorted requests including some big bowls, plates including plates that were supposed to get medallions. Today I threw butterkeepers and then this evening trimmed them as well as the pieces I threw yesterday and added handles to the XL soup mugs and some XXL round mugs. When it came time to trim the plates I realized they were too wet still and they would have to wait..and I noticed I put the wrong rim on the plates to get the medallions. UGH. More plates tomorrow, then I'll be be throwing sugars and creamers too. AND I should start glazing. Etsy is hungry and needs more pots. We took 2 shopping carts of boxes into the Weis Market USPS counter today. Looks like I have at least one cartload for tomorrow already. My shipping supplies are dwindling so I ordered more boxes, peanuts and bubblewrap today. This should get us through the holidays, but I won't complain if it doesn't. 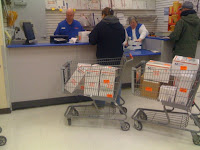 You see...scattered, not much focus.
Posted by Unknown at 1:55 AM No comments: