Did you miss us?

When you last heard from us we were frantically producing wares to take to Mississippi for the SCA's Gulf Wars event. It was not going as planned.

The biggest problem among many was we had a couple bad boxes of clay that were producing bloated pottery. big gaseous warts that would split open right on the piece itself! With the result that most of what I produced the first two weeks I threw turned out to be garbage, or at least fodder for our chimney mosaic project. A very few pieces ended up in our Etsy online store as seconds, but most were unsafe to put out for public use.

So we ended up rushing and rushing and not sleeping and trying desperately to get together 3-4 K of pottery to take to Mississippi and hand over to Jessa who is the boss of the shop that carries our work and her clothing all around to time travel events such as Gulf Wars and The Bay Area Renaissance Festival.

Our plan was to drive down over two days, drop off the pieces and visit with Jessa and our friend Kerry of Fire Horse Pottery  then head into New Orleans for a day, a night or two depending on the prices of hotels, and head back to PA by Thursday. It was a lovely time, Spring was evident, the weather was warm and we managed to find some screamingly good hotel deals on the trip.

We met in Hattiesburg at a lovely little Thai restaurant called Jutamas had a great visit and then headed towards NOLA. We  ended up just outside the city in a Comfort Inn, spent the night and headed in to NOLA in the morning.

First stop was the Visitors Center, to get a tourist map and to take a quick trip across the street from them to see the old city cemetary that has the grave of The VooDoo Queen of New Orleans as well as a 9 foot pyramid that will be the final resting place of Nicolas Cage. 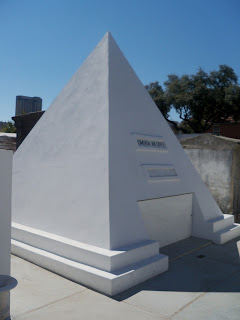 Then we headed to The French Quarter, and had a Margaritaville, Rum based Brunch and went wandering the streets, window shopping, listening to the live music that appeared every few blocks and lazing the afternoon away. We had lunch at the Market Cafe, Crawdads for Rowan and A greek Salad for me, as well as an additional infusion of alcohol. Overall a pretty nice day. A few hours later we drove off into the sunset (OW!) and headed to our next adventure in Biloxi.

Biloxi was a mixed bag for fun.. I have a soft spot for Biloxi having visited it several times before Hurricane Katrina wiped 90% of it off the map. It houses the brand new George Ohr museum which was one of the things wiped off the map during Katrina.. It has the first Casinos I ever visited..and had slots loose enough I could play on $20 for hours.

I visited Biloxi two years after Katrina and it was still a wasteland of downed buildings, garbage and scrap heaps along the beaches, it was heartbreaking.

This time it looked like a bustling city. There were still some empty lots and foundations, but most of the downtown area looked vital. Many of the Casinos were rebuilt and there was a lot of traffic. We had trouble getting a good price on a hotel room in the middle of the week (used to get a spa room in a casino for $69 on a Wednesday) so we opted for a couple hours of slots ( a whole lot tighter than they used to be) and that was enough fun for us, meaning I wasn't gonna give the one armed bandit another bill without getting at least some good bonus action... we found a convenient waffle house for a 10:30PM dinner and headed towards home, hoping to find a good hotel in a couple hours. 2:00 AM we finally found a place.. the road we were on was desolate, but it gave us a good jump on the rest of the trip.

The drive home wasn't as much fun as the drive down, but we had some great conversation and saw some great sights and by the time we rolled into our driveway last night at 10:00 we were so glad to be back to our home and ready to face our regular day. Next time..I want a real vacation. without rush, struggle or 2 day time limits. I know Rowan feels the same way. Mixing work and play isn't the same as just play, no matter how we try to justify it
Posted by Unknown at 11:07 AM No comments: