Electricity at Shows and Events.

Many of the shows we attend as merchants give us a long selling day. Many are  private events and we camp with or behind our booth. One thing always gets us some special attention. While everyone else is burning noisy propane lanterns or wee battery powered fluorescent lights, we have bright lights that make the pieces easy to see. I got the secret from my friend Kerry of Firehorse Pottery, but I'm constantly being asked about it.

We have a regular car battery that we picked up for $69 two years ago (2009) a 750watt Power inverter (mine even has a USB port), a power strip, and extension cord and at home, a 2amp slow trickle car battery charger. Typically we go to an event, use the inverter to first power the 110 volt plug-in high powered air mattress pump, then set it up for lights, computer and cell phone charging. Typically we get 3 evenings of light using 2 full spectrum fluorescent lights that burn about 38 Watts each, a few hours of laptop charging, and nearly unlimited cell phone charging. Some of the events we do are over a week long though and we plan on picking up a second battery later this year to help carry us through the long shows.

Kerry uses a Marine Deep Cycle battery, which will apparently last longer, but I found it too heavy to manage. I'd rather have 2 lighter batteries.

When it's all over, we go home and slow charge the battery to get it ready for the next event. It's really nice and over time it's less expensive and more convenient than running extension cords and purchasing electric from the campground.
Posted by Unknown at 6:40 PM 6 comments: Links to this post 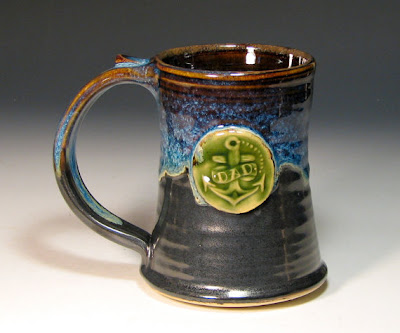 We're pretty excited to have just pulled the first few "Dad" mugs from the kiln. I think they're looking pretty good! Since they're hot..and we're hot (overheated that is) and we're going to a hot event this weekend we're running the TOOHOT coupon special for 15% off in the Etsy Shop. The code will be good until Monday at midnight :)
Posted by Unknown at 11:22 PM No comments: Links to this post

May Day, May Day we have two kilns down! 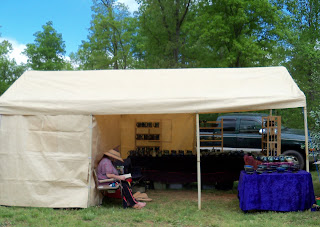 We just returned from an event in Standardsville, Virginia at a beautiful campsite called Heavenly Acres just outside the Shenendoah National Park. This was a small camping event. A Spring Festival, Beltane, or Mayday Festival. Yes, there was a Maypole. These types of events are really fun for us because it involves a weekend locked away from most of our work. I'll admit, we cheat. I have a smartphone and can tether my laptop to it and we were able to do a little bit on facebook and a little bit with the Etsy Store. 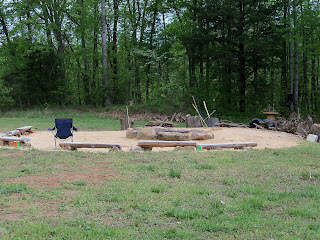 As an event, this type of thing is pretty fun, and lower pressure than the average art fair. We're set up in a 10x20 garage style tent with part of it blocked off for us to sleep in. Pretty convenient eh? Roll out of bed, and open the shop :) It was also very convenient that the hospitality tent was right next door so I could toddle over at anytime day or night for coffee, cookies or other delightful snacks. The flush toilets were also directly behind us. Overall, I'd say we were in as much comfort as was available.. 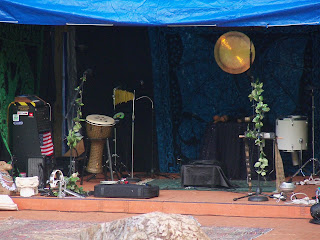 Directly in front of us was a big sand circle for a bonfire where there was drumming and dancing till the wee hours and just past that was a stage where we were treated to nightly concerts, all from the comfort of our booth.

The weather was nearly perfect, though it did get into the 40's at night and it did rain a bit during pack-down, but we didn't mind too much since we had to come home and set up the tent for our annual Mother's Day Home Studio Sale. It was a damn fine weekend, and sales were above average..just like the show :) Which was a good thing because we had kiln problems awaiting us when we got home.
I don't want to go into it too much because I made the problem worse, but the basics are that I lost an element in a glaze fire last week. Then in our other newly repaired kiln I lost another one. Now There are two kilns down, and while trying to jury-rig one of them I broke the new element. So now I am down 3 elements and have to try to get them here from Canada in under a week. In the meantime I wired together the ends of a burned out element to try to squeeze one more glaze fire out of this kiln before the sale this weekend.
Posted by Unknown at 9:49 PM No comments: Links to this post