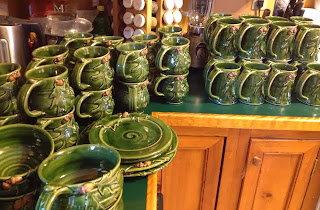 I've taken to posting daily on the Hughes Pottery page on Facebook, and only writing a blog post on the occasions that I have 2 brain cells left to bounce off of each other. This has been increasingly rare as time has passed. This has been a tough year of transition for us. Some good, some bad, but change regardless.

So what's been going on?

At the beginning of the year, Hughes Pottery ran a very successful Kickstarter Campaign to raise money to attend the Buyer's Market of American Craft and enter the wholesale market. The campaign was a success, and we went to the BMAC and we got a whole lot of new customers. So many new customers that we are still sending out the rewards we promised our backers. We got twice as many backers and twice as many customers from the event that we anticipated, so naturally it's taken twice as long to produce and send out the rewards. We're about done now, the only ones left are the ones that include chocolate chip Biscotti. And I think I still owe someone in Australia some magnets. They will be going out soon.

The biggest new customer we got was Gaelsong and they have kept us hopping. Hot on the heels of Gaelsong was The Old Forge Brewing Company who had us make all the plates for the Grand Opening of their new location.

It has been unreal. Hardly a minute to think. But life goes on and throws in some family stuff. In June we had to move one of the kids and a friend to school in Monessan PA. In August we had another kid move home from the DC area.

In the midst of all this new business and moving chaos we have been searching for a new house, We really need a place, a nice place, on the cheap with a 2+ car garage for the studio and zoning appropriate to running a business. It's hard to find. The last time I posted, on July 3, we had just gone to see a big old Funeral home. Since then we have seen some 10 or so houses. I think we have a winner, but we'll know in a week or so. I may even post here again before December to tell you all about it.

In the meantime, here it is October and we have very little personal stock, normally we have a sale at our house towards the beginning of November. I'm having doubts about having enough stock to have it. I'm getting focused on making for us now, so who knows..as a team Rowan and I can often do the seemingly impossible. If nothing else we'll have an amazing amount of stock for our online store through the holidays.

Stop by the Facebook page and visit, see what's going on in the studio, say hello!